Mobile gaming means you can play games almost anywhere. The problem is finding games with no ads or in-app purchases. Which is getting increasingly difficult these days.

Are you looking for free mobile games with no ads for Android or iOS? Then read on for our list of unmissable games you can download for free, none of which contain ads or in-app purchases!

With Stranger Things: The Game, players are sent back to 1984 in Hawkins, Indiana. The game takes place between the first and second seasons of Stranger Things, so it helps if you have a little knowledge of the Netflix series before playing.

In this game, you’re greeted with 16-bit graphics, harking back to the golden age of gaming. You start off controlling Officer Hopper, then gradually meet the kids on the adventure. Each character has their own unique specialties and talents, such as Lucas’s Wrist Rocket and Nancy’s baseball bats.

Stranger Things: The Game combines puzzles with a beat-em-up kind of adventure, and it’s sure to delight everyone. A wealth of secrets to discover and unlock await…

Want a buttery-smooth puzzle? Then minimalist puzzle game ULTRAFLOW is worth checking out. While the graphics are super simple, the gameplay itself can prove rather challenging.

The goal is to get the numbered ball to the larger circle, within a certain number of bounces. This limited number shows on the smaller circle. Once you use the last bounce, the ball explodes if it hasn’t reached its destination.

While some stages are difficult, the game lacks timers and other restrictions, so you can play at your own pace. To restart a level, just tap twice on the screen. With 99 levels, ULTRAFLOW’s bound to keep you busy for a while.

And if that’s not enough, there’s also ULTRAFLOW 2, with an extra 180 levels available completely for free.

If you need a good retro fix without turning your Android into a retro gaming hub, then GameStart Pixel Battle is the ad-free mobile game that you’re looking for.

A good choice to consider if you want old-school side-scrolling platformer fun, GameStart Pixel Battle comes with great 16-bit graphics. Topping it off is a chiptune soundtrack packed with 80s and 90s nostalgia.

You take control of gamer girl Alyse and help her discover what’s been sabotaging games, making them impossible to play. After all, surely nobody finds crazy difficult games fun.

GameStart Pixel Battle is a side-scrolling platformer, challenging you to fight your way through increasingly difficult foes. Look out for cameos from popular pro gamers and unlock more playable characters, each with their own unique abilities.

Even if you’ve never heard of GameStart, this gem of a game will serve your retro action fix well.

Looking for an adrenaline rush? Give DATA WING and its futuristic yet retro graphics a try. While it might miss the chiptunes you grew up with, the original EDM soundtrack is still pleasant to listen to.

The goal is to race to the finish line in various objective-based missions assigned by the “Mother” computer system. What sets DATA WING apart from other racers is the unique driving system. Your ship flies automatically and you tap left or right to steer towards either direction.

To brake, simply tap both sides at the same time. You can also thrust off walls, using the momentum to your advantage to pass other racers.

Though DATA WING is about the racing, it does have a story spanning two hours with 40 levels to complete. Ultimately, this is a fun story-driven, competitive racing game that gets your blood pumping. 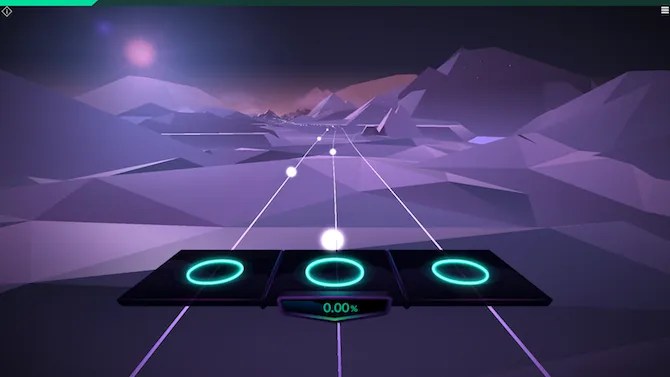 If you’re seeking an educational game for kids, or maybe just want to learn something new yourself, then OHM—A Virtual Science Centre is a good option.

OHM features a gorgeous, low-poly design, making it one of the best-looking mobile games around. The graphics are beautiful and pull you into the fascinating world of energy and electricity.

In OHM, you’ll learn about what energy is and how it works. This includes how energy becomes electricity from an atomic level, working its way up to bigger objects, like transportation. The comprises several puzzle-based chapters, featuring different topics that are explained in a fun and interactive way.

OHM’s puzzles are mostly simple, but that’s expected from a game that’s supposed to serve an educational purpose. But as the learning progresses, the puzzles get trickier. But it never gets too difficult, making the game perfect for children.

After all, who said you can’t have fun and learn something at the same time?

Love Geometry Wars but don’t feel like paying a premium? PewPew lets you experience multidirectional shoot-em-up action at no cost.

The graphics in PewPew are basic, but if you crave bright neon shape outlines against a black background, it’s perfect. PewPew has a high frame rate and features five different game modes: Pandemonium, Dodge This, Assault, Chromatic Conflict, and Asteroids.

Pandemonium includes enemies that explode or spin maniacally upon death, causing chaos for you. Dodge This challenges you to collect boxes while avoiding enemies. Assault is like classic Geometry Wars, where you fight waves of enemies.

Chromatic Conflict involves killing only enemies that match your ship’s current color, which gets a bit tricky and requires observation and patience. Finally, Asteroids is like the classic game of the same name that you’ve probably played before.

As if these game modes aren’t enough, PewPew also has playable ships to unlock and leaderboards to climb. It’s amazing how this game is free with no strings attached.

Want something that’s completely free but also totally unique? Then check out Underhand by Spoopy Squad—there’s nothing else like it.

Underhand bills itself as a CCG, which usually stands for “collectible card game” but here stands for “cultist card game.” That means you take on the role of a cult leader and must manage your cult’s resources effectively.

Meanwhile, you must respond to various event cards that get drawn from the deck. Your response to events determines the success of your cult and how far it will go.

Your cult’s main goal is to summon an “Ancient One,” but again this depends on your resource management and success. Otherwise, the cult may fall prey to the trials and tribulations of time itself. Either way, Underhand provides a thrilling choice-based adventure that anyone can enjoy.

We recommend you carefully go through the tutorial in the beginning, because otherwise you’ll likely end up getting lost. However, once you start playing, it’s hard to stop.

Tired of always being the good guy in games? Then you’re in for a treat with Wicked Lair, where you get to construct your own dungeon. You can build this dungeon as deep as you like, then fill it with nasty monsters and minions.

The main goal in Wicked Lair is to dispatch invaders to the nearby town and destroy it. Heroes will retaliate and attack the dungeon, tower defense style, so overpower them with your monsters.

Various minions can be discovered and kept in your lair, along with nine dungeon types to fit your play style. You even learn spells that can aid your minions, because they won’t be able to win without you.

On top of the dungeon building/tower defense mashup, Wicked Lair features a retro pixel art style that everyone will love. This is a must if you enjoy tower defense style games and like to be on the dark side.

A very different option is Cytoid, subtitled as “A Community Music Game” with a Guitar Hero/Let’s Dance approach.

All you need to do with this game is tap the screen when the circles appear. Sometimes, you need to slide your finger along the path shown. Whatever happens, you play to the music, a fun techno soundtrack that carries you through the game.

Increased accuracy lets you level up and progress to the next stage, where things become even tougher.

Cytoid is available for free and with no ads or in-app purchases. Which is amazing given how this is one of the most unique mobile games available.

Have an itch for some number puzzles? Then Makenines is right up your alley.

In Makenines, you’ll find dozens of handcrafted puzzles to both stimulate and relax the mind. The minimalist visuals and ambient soundtrack are also rather soothing. The goal is to clear the grid by combining tiles so that they equal up to nine.

While it looks and sounds easy, the puzzles get more challenging as you go. It’s all about the process of elimination.

With Makenines, players get 80 puzzles to solve, split up across three difficulty levels. You can start off with the Easy puzzles, then move on to Medium and Hard. There’s even a set of nine new puzzles that rotate every day, giving you plenty of challenges.

You get the full game of Makenines for free and there are no ads. However, unlike other free mobile games with no adds, it has a voluntary tip jar. This means you can use an in-app purchase to support the developer if you feel like it.

Doing so also gets you extra puzzles, but these are completely optional bonuses.

What Are Your Favorite Games With No Ads?

While there are many trendy mobile games out there, most of them are full of ads and try to push in-app purchases on you, which can get really annoying really quickly. Fortunately, there are still some great free mobile games available, as we’ve shown you.

It isn’t just mobile games that you can get for free if you know where to look. So if you’re also into desktop gaming here’s how to download premium PC games for free.

Read the full article: The 10 Best Free Mobile Games With NO Ads or In-App Purchases