Linux software is robust enough to work without causing problems, but sometimes even the best apps might hang. Rather than wait for them to crash, you can kill these unresponsive programs. In fact, there are so many ways to kill Linux programs that you might find you’re spoiled for choice!

If you’re experiencing problems with an application in Linux, here are several ways to kill a program in Linux.

1. Kill a Linux Program by Clicking the “X” You’ve probably already tried walking away and making a hot drink. If you returned to your PC to find that the app is still hanging, it’s probably had enough time to start working again. An unresponsive app typically has grayed-out buttons, or options that don’t appear to work. You may also be unable to move the app window around the screen.

So, what is the solution? Click the X button in the top corner (left or right, depending on your Linux operating system). This should stop the program dead in its tracks. You might see a dialog box, asking you to Wait or Force Quit to end it now.

If all goes to plan, some distros will prompt you to send an error report.

2. Use System Monitor to Kill a Linux Process 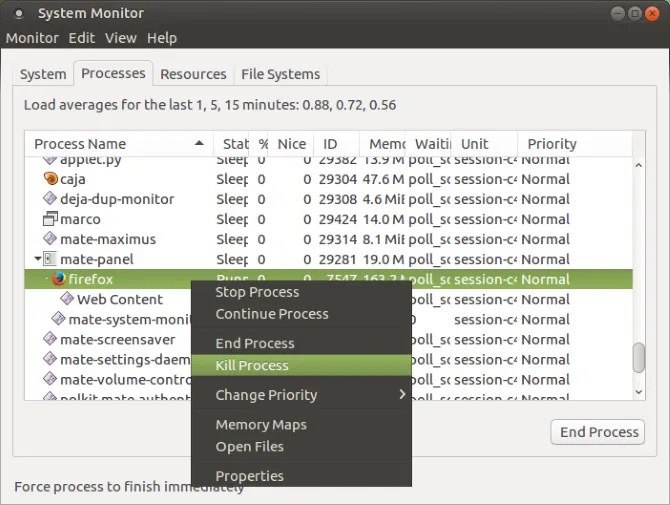 The next option is to open your Linux operating system’s System Monitor utility. This is typically found in the System Tools menu and displays a list of running processes under the Processes tab.

To close an unresponsive application here, simply select it and right-click. You then have three options:

It’s best to use these in order. However, if the application is one that hangs regularly, you might prefer to use a command that you know works.

Another option you can employ is xkill. This is a force kill tool preinstalled in Ubuntu, but you can install it via the Terminal on other distributions if necessary. When called, xkill will enable you to close any desktop process. Install it with the following command:

Once this is done, run xkill by simply typing

Your mouse pointer will then display a cross (or a skull). Left-click on the offending application to close it

If it’s not possible to close your unresponsive app with any of these desktop-focused methods, the solution might be the command line…

If your app is unresponsive and the above suggestions don’t work (the GUI might be unresponsive), hit Ctrl + Alt + T to open the Terminal.

Several command line options are available to help you to close your app. Better still, these can be used either on your computer or by connecting over SSH from another device.

The kill command can be used here, but first requires a process ID. You can find this by running a command interrogating the application for its process ID:

The result will display the process ID. This can then be used as follows:

Note that you may need to append the command with sudo.

What if you don’t know, or cannot find, the process ID? This is where the pkill command comes in. Rather than a process ID, simply use pkill along with the process name:

Alternatively, you can use the pgrep command to find the process ID:

…and following this, use pkill with the process ID.

As with the kill command, this should close the process within around 5 seconds.

6. Kill All Instances With “killall”

No luck with kill or pkill? It’s time to use the nuclear option: killall.

Fortunately, it isn’t as devastating as it might be. The killall command will end all instances of a specified program. So, rather than killing one Firefox window, the following command will end them all:

All you need is the process name and the killall command (possibly with sudo if demanded by your setup).

Naturally, you should only use this command when needed. It’s unsuitable for most unresponsive program situations.

Want to save time closing unresponsive software? The best option is to create a keyboard shortcut. This will give you the immediate option to close an app, but it requires xkill for this to work.

In Ubuntu, open Settings > Keyboard and click on Shortcuts. Select Custom Shortcuts, then + to create a new shortcut. Input “xkill” for both Name and Command, then Apply. This will return you to the shortcuts list—select the shortcut, then press the required keyboard combination that you will use to call it. 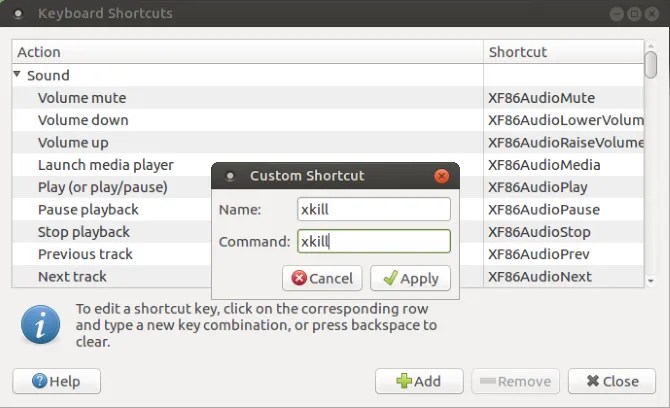 Next time you need to close an app, just use the keyboard shortcut. The mouse pointer will become an X, and you can click anywhere on the app you want to close.

Are unresponsive applications regularly causing problems? You could probably benefit from making some changes to your Linux computer.

Installing additional RAM is the number one way to give your computer more power and might be just the thing you need to keep those temperamental apps from becoming unresponsive in future.

So, the next time a Linux application or utility hangs and becomes unresponsive, all you need to do is apply one of these solutions:

If none of these solutions works and you’re regularly experiencing unresponsive Linux apps, consider switching to a lightweight Linux operating system.